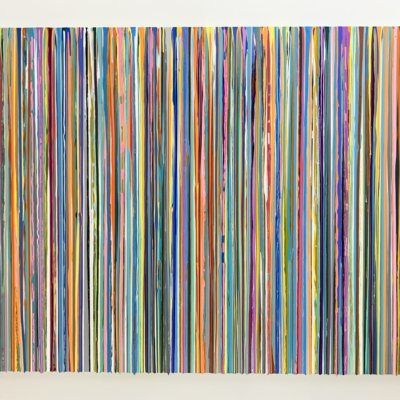 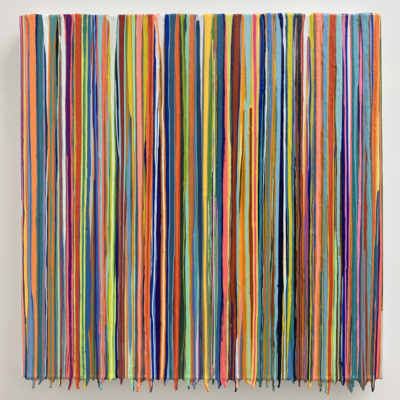 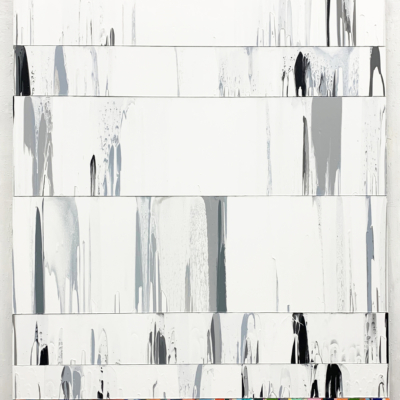 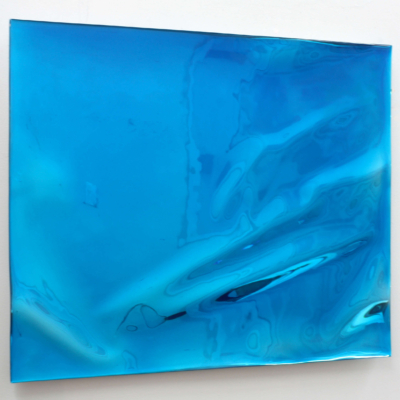 Cathy Choi finds inspiration from the physical and metaphysical qualities of water, painting with pigmented resin. The phenomenon and sensation of color is what ultimately drives her work. Her intention is not a literal representation of natural elements. Instead, she uses these references to point toward spiritual notions of purity, cleansing, and beauty.

In her recent Mylar series, color illuminated by reflection, along with mylar’s unpredictability of forms, provides many avenues to explore her interest in luminous color, resulting in the fusion and blurring of lines between a painting and object. She pours thin veils of pigmented resin, floating one atop another.  Often it is necessary to sand in between layers.

The reflective Mylar magnifies color and creates a virtual space by bouncing light back to the viewer.

Similar to a hologram, the illusion of three dimensional space is not clearly defined, instead it shifts as a myriad of volumes, distorted by viewing the painting from different angles. This “inner reality” changes as the viewer moves around the work.

The process of selecting colors and parameters of her work is balanced by the quick decisions necessary when working with resin. Since the material dries quickly, the medium stimulates an impulsive drive and intuitive response.

Born in Seoul, South Korea, the artist currently lives and works in Brooklyn. New York. Choi received her BFA from University of Washington, Seattle, WA and her MFA from American University in Washington, DC. Her works have been exhibited nationally and internationally at the UMASS Herter Gallery (Amherst, MA), D.U.M.B.O. Arts Center, (Brooklyn NY) and Galerie Karrer (Zurich, CH). Choi’s work in graphic design has been recognized with awards from AIGA (1993, 1994) Art Director’s Club of Philadelphia (1994) and I.D. Magazine (1993, 1994).